John served ten years in the Marine Corps and currently works for the Department of Defense. However, he has learned much more about shooting and self-defense outside the military than he ever did during his service. John has trained under some of the most respected firearms instructors in the country, including John Farnam, Louis Awerbuck, Kelly McCann, Pat Rogers, Jeff Gonzales, Pat Goodale, and Tom Givens. He incorporates the best and most practical methods from his own experience and those of his mentors. He prides himself on teaching proven techniques that work for average citizens looking to protect themselves, their families, or their community.

I wish I could have gotten Pat [Rogers] to write a book. But he just, he was adamant not to. Someone made the comment that when a man like that dies, it’s the equivalent of the Library of Alexandria being burned… The death of the book has been vastly under-reported… You mentioned YouTube and things of that nature. There’s no editorial process for that. People can just come with shit, and they get good hits. And then some of these guys blatantly speed up their videos. The editing is obvious, you know, for speed. They’re all about the speed, but they can’t make informed decisions outside of a square range environment. And that is… pretty sad. 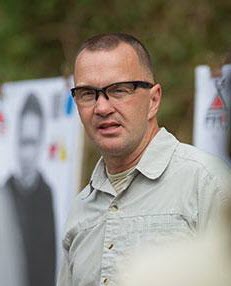 John Murphy on Training and History